That’d be Extreme Long Distance Relationship. And friends, do I have a treat for you today OR WHAT. Grab yourself a snack, ’cause this is gonna be good.

The one and only Dane has offered up his manhood take on female fashion to all the beauties that read my blog. I gave him free reign to write whatever he wanted–but I did tell him if it wasn’t good I wasn’t posting it. Just to be clear, I make the rules around here. Without further ado…

P.S. My side thoughts are the ones in red

To readers of Gridiron Lipstick’s Blog, you have a guest blogger here, someone really close to the fashion diva herself. I might add, that I’m more than just a fan…I’m her man. (what can I say, he’s a little cheesy–but I’ll take it!)
You see, I’ve come to the realization early in this relationship that Kait is way smarter than me, so I make up for this with a kicking bod and treating her like the queen she is.
Ironically, though Kait, like most women, can be a bit surprised at the inner-workings of a man’s mind. This often results in extreme humor, funny faces, or “OMG! Are you kidding me?” (this is his cue to tell me more about the often insightful, sometimes disgusting, thoughts of men)

We all know that yoga is a wonderful way to exercise. Does wonders for the mind, body, and soul. I admit, I’ve done it a few times myself. Don’t worry though, I have never done yoga in yoga pants…that is for girls. Maybe some guys…but definitely not this guy, and I sure as hell don’t know or don’t care to see any guys in yoga pants…which leads us into today’s “fashionista” guest blog. 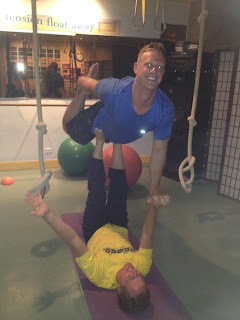 Dane is clearly, not wearing yoga pants, but his cheeky partner underneath sure is 😉

If you’re an attractive woman, what guy isn’t going to let his eyes wander your way? Most women that do yoga are pretty attractive ladies. They care about fitness and looking good. Men like myself appreciate these efforts. The last time I did yoga, I felt like stress was lifted away all for about thirty minutes until I got to work.

Yoga pants are meant to wear for yoga…not meant to be worn around town. I beg to differ, I like yoga pants all of the time. Let’s be honest ladies, before you leave the house, you look in the mirror. If you don’t, you’re driving down the highway multi-tasking away on the phone, drinking your coffee, applying mascara, etc. No doubt about it you’re way more talented than men. We can’t possibly handle more than probably two things at a time…which is usually a beer in one hand and the remote in the other.

When we see attractive women in yoga pants we look. Why? Well you have a kickin’ bod, and those yoga pants show off a lot…and well they show a bit more than anyone wants to see sometimes…which leads me to my story.

Unfortunately I had to drop off Kait at the airport after an amazing time together. Saving you the sappy stuff, even though secretly you’d like to hear all about it, the first thing Kait tells me is, “Hey, check out that girl right there.”

Now, if you know Kait and I, you would expect anything at this point…and that’s what makes us “us.” the coolest people ever. Much to my dismay I laid my eyes on a sight no man, nor woman wants to see– EXTREME YOGA PANT BOOTY SWEAT!

First this was not your average butt. It was not a rap song, “donk.” It was well…large and out of shape. Workouts should be in gyms, outside by the beach(hey! not all of us can live on a beach in Hawaii!), with your girlfriends, or with your man. This woman’s workout must have been running through the Honolulu airport dragging a suitcase while probably yelling at her husband along the way. (Guys, we’ve all probably been there…)

In the midst of our sadness, we did our best not to break out into laughter of the booty sweat stain through the woman’s yoga pants. I guess she made her flight, but that’s definitely not flying in style.

Okay, so the part that he forgot to mention is that this whole yoga pant debacle began when I spotted a girl (at yet another airport) with a pretty hot bod, but an ugly, saggy hiney. We got to talking and he summed up that yoga pants are to men, what men in tight briefs are to women. Think: Calvin Klein ads.
‘Nuff said.