Well, actually, I left it at the San Francisco airport.
Details, details.

Dane and I had an incredible time together in San Francisco
and I’ll be damned if time doesn’t absolutely grow wings and chug Red Bull when
we’re together. And now that there’s 65 days ‘til Dane comes home for three
weeks at Christmas? Time has taken a sleeping pill and set up shop on its sofa.

Let’s start at the very beginning (a very good place to
start). Dane got to SF before I did on Friday, so you know what he did? He had
a very cold Diet Coke waiting for me at baggage claim. You know he’s a keeper
when he brings you Diet Coke on demand. In this case, no demand at all–JUST
‘CAUSE.
We then ventured to the apartment we had rented for the long
weekend that sat high above Fisherman’s Wharf. This weekend also happened to be
the San Francisco Air Show AND the tail end of Fleet Week AND America’s Cup, so
the city was jam packed. No skin off my back, I like people. San Francisco also
likes people, which is why they jacked up the hotel prices to nearly $900/night
this weekend. Hence, the apartment factor. It was beautiful and we had a
rooftop deck that looked over the entire city with picturesque (5 point word)
views of the city, Golden Gate Bridge, and Alcatraz.

Note to all: My parents and their friends joined us for the
weekend (and then continued on to Napa Valley!) so if you notice other people
in these photos, you’re not like “WHAT THE..?!?! WHO ARE THOSE PEOPLE CRASHING
DANE AND KAIT’S PARTY!
Our first day included walking around the Wharf, enjoying a
seafood restaurant with a great view of the bridge, and crashing a little bit
earlier than expected due to jet lag. 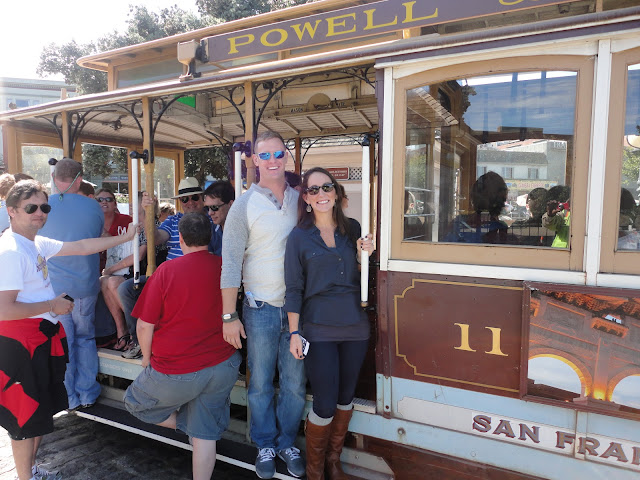 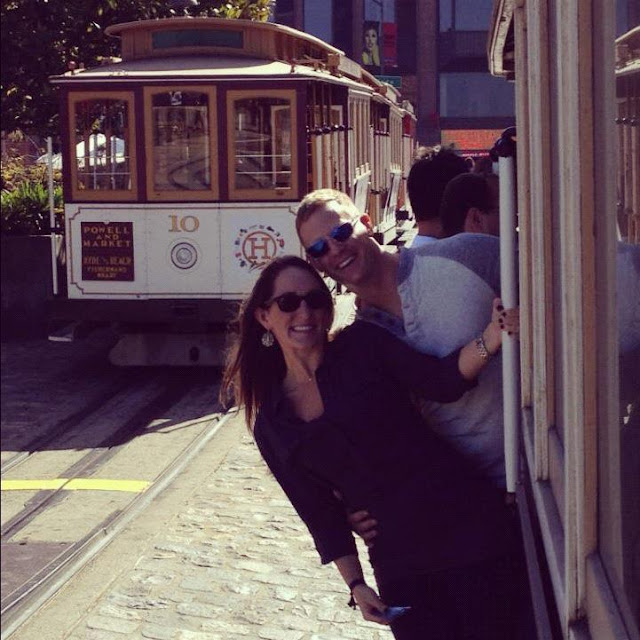 Saturday was chock-full of everything tourist. We hit
Boudin’s bakery for breakfast, stopped in Ghiradelli square, rode a cable car,
saw the Painted Ladies a la Full House, and had date night in Little Italy. We
also watched the Giants lose…which let me tell you—was not a fun experience. I
imagine it was a little bit like being a New York fan and finding out Derek
Jeter was being traded to the Phillies.

That is neither here nor there, because I would be
completely remiss to leave out the following details of our day:
1.
We saw a topless woman walking around the square
and occasionally pulling down her pants to make herself completely naked. But
wait..there’s more. Every so often she would take her boobs and swing them
around like some sort of twisted Cirque du Soleil routine.
a.
But Kait, why did you keep staring? Friends, I
had no choice. I was in line for the trolley and when a woman is doing boob
tricks in the middle of a public square it’s a bit like a car crash—you can’t
help but stare. Also, we just don’t have that caliber of entertainment in
central Pennsylvania. Weird, I know.
2.
A friend recommended we try out “The Stinking
Rose” restaurant while we were visiting SF. While we didn’t go there for
dinner, we stopped in later in the night to have a couple drinks. A couple
drinks led to me begging to order an appetizer, and so Dane obliged. You guys,
the real lesson here is to not go to a garlic themed restaurant with your
boyfriend. Even if your boyfriend is nice enough not to complain about your
horrible choice in appetizers. I’m not going any further with this story, just
thank me later.
This is getting lengthy and so you all will have to wait
until tomorrow to see if I escaped Alcatraz.
(totally lame, I know. Just go with it, I’m a little tired,
OK?)