I think it’s safe to say that this is not the post I had in mind for today. In fact, I had a post that was titled much differently and I probably would have started with a photo of confetti or beer or malasadas (Portugese donut that is wildly popular in Hawaii) — but I don’t have any of those things.
Let’s rewind to Sunday morning. Dane and I woke up bright and early at 2:45 to get down to the start area in time. It takes us a good 40 minutes to get there, plus with traffic and trying to navigate parking, we wanted to make sure we could get to the start by 4:15AM at the latest. Those port-o-potty lines are no joke! 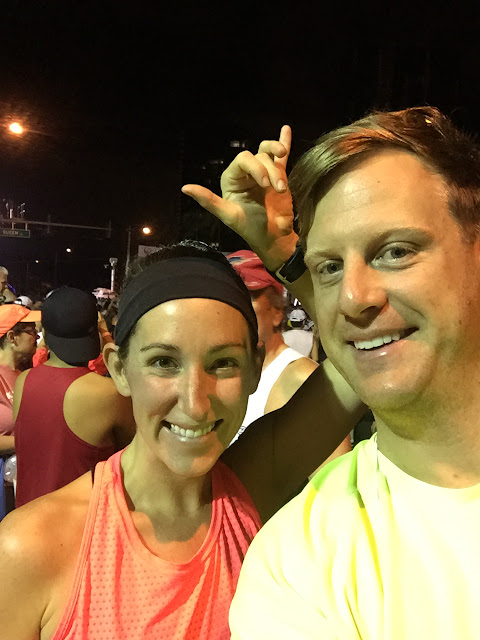 So we parked the car, walked to the start, found a place to go to the bathroom one last time and made our way to the start line with about 10 minutes until blast off. I was feeling so good, mostly excited, but with a tinge of nervous energy. I had felt the same way for my half marathon, so I figured it was a good sign. The only things I was really worried for on race day was a pesky IT band injury, couple with bursitis in my hip. I have been combating both for several weeks now, so I knew that if anything gave me trouble – it would be that.
The fireworks launched and it was GO TIME!
Dane and I had agreed to stay together no matter what; our only goal was to finish together. We blew through miles 1-3 keeping a great pace (for us) at 9-11 minute miles. I had heard horror stories about expending tons of energy up front, so I was cautious to blow too much energy trying to make any specific times. 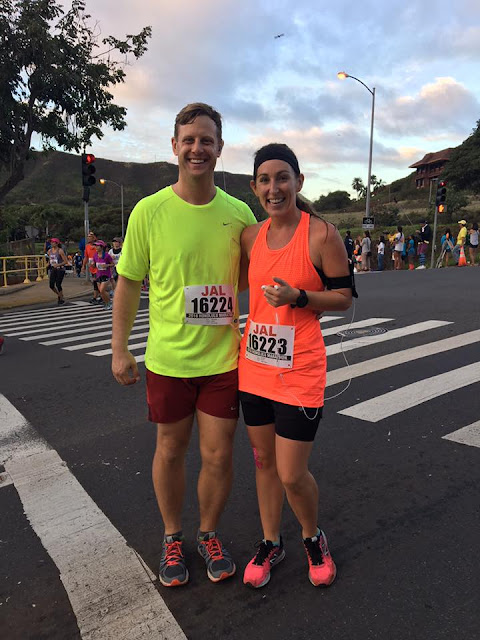 At mile 4, we stopped to go to the bathroom again. Nervous peeing, I would say. LOL! And took off again. Mile 6 began the uphill climb of Diamondhead Crater and while winded, I felt good. I realized pretty quickly I hadn’t spent nearly enough time on hills, but I was still feeling great. 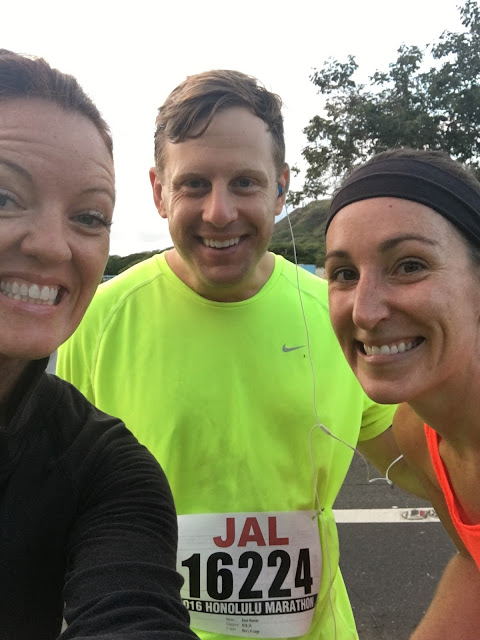 At mile 9, our friend Jill was waiting with ice cold water, bananas and Clementine oranges. They tasted so good, plus it was nice to see a happy, smily face cheering for us as we rounded the corner into Hawaii Kai and the sun began to rise. 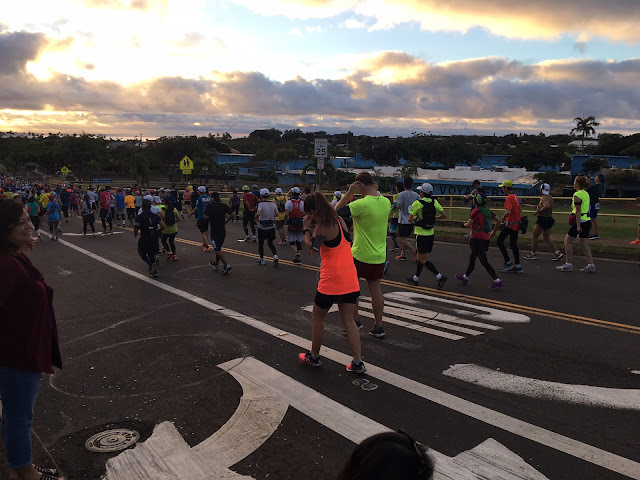 We were still keeping a pretty good pace, but the stop-and-go was starting to wear on me. At mile 11 after getting some Gatorade, I motioned to Dane I needed to walk, because something just wasn’t quite sitting right. I wasn’t cramping, but I felt a wave of nausea I had never felt before while running or any other type of exercise. It hit me like a ton of bricks.
At 11.6, I projectile vomited all over the side of the road, but felt instantly better. I have known people to vomit while running, so I wasn’t overly concerned. I honestly was just happy to have it “out of my system” so we could get a move on.
Except it didn’t get out of my system…it rooted itself there and got comfy. At miles 12, 13, 14 and 15, I was stopping to vomit. Each time afterward, I would stop at the water stations, rinse my mouth, try to sip the water, feel a tad better, start to run, puke….rinse, wash, repeat. The sun was starting to get pretty hot and at mile 16 when I doubled over to puke, it wasn’t stopping this time. I (fortunately or unfortunately) happened to do this right in front of a police officer who took one look at me and said I needed medical attention.
To say I was not interested in that would be a total understatement. I didn’t know what was wrong with me (though I had a sneaking suspicion dehydration was at work), but I knew I didn’t want the fanfare of medical teams, stretchers, ambulances and the like. Unfortunately, I wasn’t getting an option. Once at the medical tent, they poked and prodded and realized my blood oxygen level was at 87 and I was well on my way to severe dehydration. There was no way they were letting me back out on the course, even if I wanted.
Heartbreaking doesn’t begin to cover how I felt in that moment and now. I feel like a failure. Running this marathon and completing it is something I have worked toward since the beginning of this year and all I can say is that – for someone who wasn’t even able to run a solid mile in January, 16.1 by the end of the year is something to be damn proud of. It’s certainly not the finish I had hoped for, and 26.2 is going back on my bucket list for 2017, but I can only be proud of myself for listening to my body and recognizing when enough was enough. Had I continued, I’m not sure what would have happened, but it doesn’t really matter at this point.
I trained hard and worked hard nearly every day for a year (A FREAKING YEAR) to make this dream a reality and I didn’t get my medal or finisher shirt, so I think it’s only natural to feel a bit deflated. But I’m not giving up. I will be getting that finisher medal and t-shirt next year. For now, I’m hanging up my running sneakers for the rest of the year and giving myself some time to rest up and prepare for 2017 – a year full of races, running and REDEMPTION. 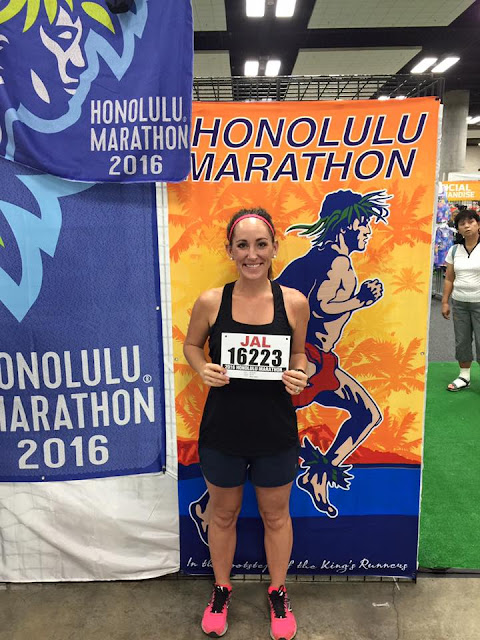 *I also wanted to take some time to make a note here that I almost didn’t write this post, but SO MANY of you have reached out in the past week or so saying how I’ve either inspired them with my running stories on Instagram or Snapchat or have given them the courage to try out running on their own. I will be the first to tell you that for a very long time — running was not my thing unless someone was chasing me. I have made a conscious effort to fall in love with it to improve my body and my health and it’s a slow process that can be frustrating and heartbreaking (like today). But it’s also such a real, genuine process, which I think is so important to recognize. If anyone out there is reading and been following along, know that it’s okay to not reach goals sometimes, because the fact that you are trying or have tried says that your heart is there already.
Thank you everyone for following along and being my virtual cheer team through this journey! It’s not over 😉